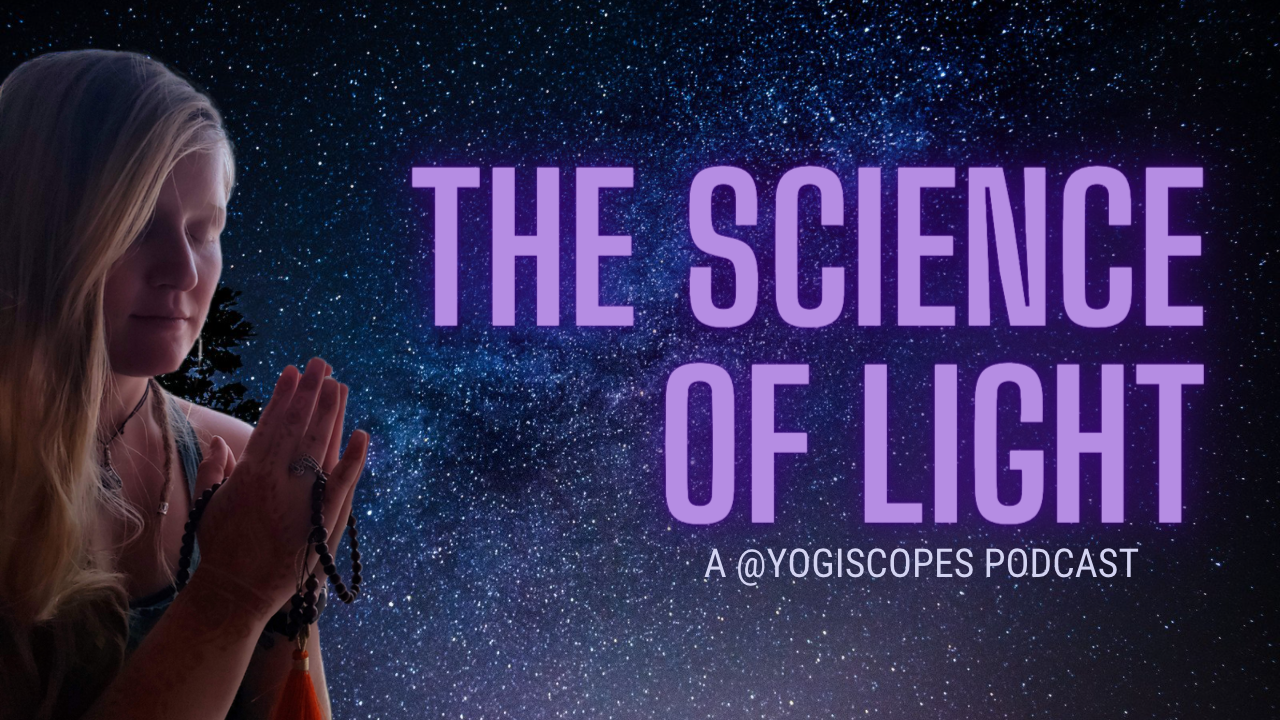 Darshan: How We Craft Identities

Who are you? Or, how do you even go about answering that question? How are identities crafted? Why do we hold the beliefs we hold? How do those beliefs influence our behavior?

In the words of Women’s Hall of Famer Maggie Kuhn, “Speak your truth even if your voice shakes!” That's what I'm doing here in this first episode. I tell my story, and relate that to the yoga philosophy concept of darshan or darsana, which literally means "viewing" but sometimes takes on connotations of worldview or school of thought.

I'm Rosemary Holbrook, founder of YOGISCOPES and The Science of Light Podcast. On the first episode of my podcast, I use the concept of Darshan and my personal story to explain my approach to yoga practice and teaching, and why I study astrology. My point of view (my darshan), which colors everything I do, is deeply intertwined with my story and the events that have shaped the person I identify as. So, while not every episode of the show is like this one, I wanted to give some backstory about my life and how I arrived at this point, and how the podcast and YOGISCOPES evolved. You can expect each episode to incorporate some yoga philosophy, some health and wellness research or science, and, of course, my own spin and point of view.

Darshan, the yoga philosophy topic for this episode and blog post, comes from the Sanskrit word darsana meaning “sight,” “vision,” or “appearance.” In the Hindu tradition, darshan refers to the beholding of a holy person, sacred object, natural phenomenon, or deity especially in imaged form. It can also refer to schools of thought or viewpoints. That’s why I chose this piece of yoga philosophy to theme the first episode—because I believe that everyone has a unique perspective colored by their life experiences. I’m here to share mine and create community with people it resonates with. In this episode, we are going to really dig deep into what has shaped my perspective and what that means for this show.

To give further context to my perspective, and therefore the perspective of the show and YOGISCOPES, I wanted to make clear distinction between religion and spirituality. I am a firm believer that spirituality and science can go hand in hand, but I also know from my life experiences that many people regard religion and science as mutually exclusive belief systems. I detailed this with some stories from my own life and childhood in the episode (I grew up in the “Bible belt” so attended multiple churches, multiple times a week, and stopped going in adulthood). But the main difference that I want to highlight is that “religion” requires one to use faith to make claims about the nature of reality, whereas spirituality in general removes that requirement. Spirituality is an embodied experience that sometimes is achieved through religious practices, but religious practices don’t always equate to spiritual experiences necessarily.

Science, like spirituality (rather than religion), also does not require people to make or believe “blind faith” claims about the nature of reality. In some ways, scientific evidence could be described as documentations of embodied experiences—what I consider to be spirituality. And, nonetheless, the dimensions of wellness (a concept given to us by social scientists) include spirituality. Whether that comes from organized religion or not is a personal decision. There are many other dimensions of wellness that people gain from religion, such as community or social wellness, a sense of oneness, perhaps even environmental wellness.

I spent time in the episode belaboring the religion versus spirituality point because this is a yoga podcast at it’s root, and it is important to acknowledge yoga’s close ties with the Hindu religion at their origins. While the two practices have diverged and can be considered separate, they are linked and even still often practiced together. I wanted to make the clear distinction, because I approach yoga as spiritual rather than religious. Doing so makes me feel like I can keep my spiritual practice that is important to me, while exploring evidence-based wellness practices in a way that feels neither dogmatic nor culturally appropriative. That’s a tough balance that I will continue to explore throughout the podcast—and that’s why I spent so much time on this first episode thinking through that balance.

I then tell my story. As I mentioned, I grew up in the Bible belt. My dad was in long-term recovery before I was born, so I also grew up around AA/NA and other “anonymous group” or 12 step program philosophies. While in school for engineering, I fell into an addiction of my own, along with a series of codependent and abusive relationships. So, I dropped out of engineering school after relapsing when I tried to go back after a year of rehab. When I returned to my yoga practice, I finally was able to break the cycle of addiction—after years of bouncing in and out of “the rooms” of narcotics anonymous and rehab.

Those experiences led me to craft my identity more around being a yoga practitioner and now teacher than around being a person in recovery. I set out on a path to understand my own healing so that I could share that with others. Since then, I have been through numerous yoga trainings, gotten my RYT (soon to be) 500, I am studying to be a C-IAYT (certified yoga therapist), a degree in health and wellness, completed several research projects on yoga for trauma, a Y12SR certification, taught yoga to other addicts in rehabs, and now….started this podcast.

Along the way, I also found out about Vedic astrology, or jyotish, and how it differs from what we know in the U.S. simply as “astrology” that I will henceforth be referring to as Western astrology. As a yoga teacher, it also felt less like cultural appropriation for me to switch over to that system. Vedic astrology uses the sidereal zodiac, which is more astronomically accurate than the tropical zodiac that western astrology uses. (Stay tuned for a future blog post on the differences between the two systems, but you can also hear more about it in the episode!) And, further sticking with my desire to be evidence based, I still approach astrology in general as a sense making tool to examines natural cycles in life, facets of my personality and my approach to relationships. That is why I chose the name “The Science of Light” for this show—because the word for Vedic astrology, jyotish or jyotisha, translates roughly to the science of light. What a beautiful way to tie together everything I’ve described here—using science to understand the healing powers of yoga and astrology, which are sometimes referred to as types of “light work”.

My hope is that this podcast will be helpful, relatable, and authentic. I want to share what I’ve learned/am learning about yoga philosophy, Vedic astrology, other spiritual pursuits, and how those relate to the latest science and research related to wellness, and especially mental health. This will, of course, always be colored by my darshan or the point of view of my guests.

The goal is to keep expanding and directing awareness in a constructive way, always keep learning and growing.  I hope to create a ripple effect of people brightening their respective corners of the world by embodying light, with practices that are proven to work (i.e., are evidence based). It is my sincere hope that you learn something every episode. I hope to provide you with something to apply to your life (i.e. a journal prompt, exercise, habit to cultivate, book to read, podcast to listen to, thought leader to follow, etc).

So, as promised: your journal prompt for this topic:
Parts of your story will always be your truth, but they don’t have to be your identity. There are two separate "big" questions here, you can work with them together or separately.

Are you defined by your ideas? What are your most closely held beliefs and values? Where do you think you picked up those values/beliefs? Think of your life experiences, caregivers, role models, communities you are or have been a part of, etc. How do those beliefs influence your behaviors and decision making?

Who are you? Try to free write on this question until you get past your roles and your stories that shape your darshan, and get closer to the essence of who you are. Maybe contemplate on how you have crafted your identity, and how you that relates to how you show up in the world.

Get Yogiscopes in your inbox!

Get personalized yoga practices based on your birth chart and the astrological weather, delivered straight to you for FREE!

We hate SPAM. We will never sell your information, or share it with anyone else.

Have you grabbed your FREE Birth Chart Decoder yet???

Have you grabbed the FREE Birth Chart Decoder yet???